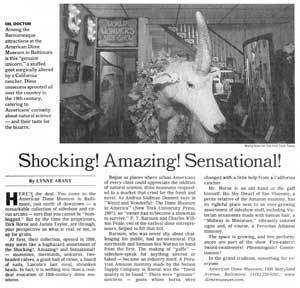 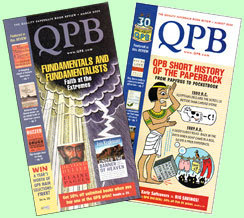 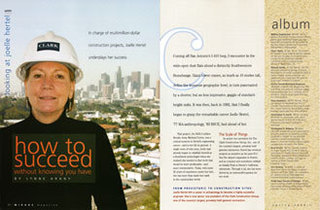 Mirage | How to Succeed… 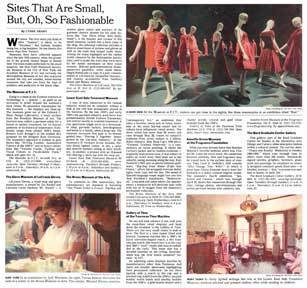 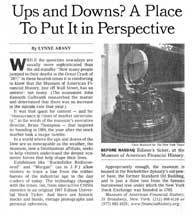 NYT | Ups and Downs?A Place To Put It in Perspective

HERE’S the deal. You come to the American Dime Museum in Baltimore, just north of downtown—a remarkable collection of sideshow and circus arcana—sure that you cannot be “humbugged.” But by the time the proprietors, Dick Horne and James Taylor, are through, your perspective on what is real, or not, is up for grabs....

Perfectly Reasonable Deviations
from the Beaten Track
The Letters of Richard P. Feynman
Edited and with an Introduction by Michelle Feynman

These days, many folks know of Nobel-winner Richard Feynman—often through his contribution to the Challenger investigation (remember those rubber “O” rings so coolly dropped into a simple glass of ice water?), or his key role in the Manhattan Project. Perhaps you even know of his penchant for playing the bongos, if not his irreverence for propriety. But how well can anyone get to know this pioneer in quantum electrodynamics…and why would they want to?

“He showed us all how to look at the world. He showed me how to laugh.”—Michelle Feynman, Introduction

Luckily for Feynman fans, and for those intrigued by his accomplishments, his daughter Michelle has dug deep into this remarkable man’s equally remarkable range of contacts—from the world’s leaders to academic adversaries, inquiring youths, family, and old chums alike—and come up with a rare collection of letters (this is the first time in print for many of them) that directly answer that very question. As Scientific American so aptly puts it, “[M]ore than the sum of its parts…[this book] provides a trajectory of Feynman's life…And it conveys a genuine sense of the man—someone who took his principles very seriously but never himself.”

COMING OFF of San Antonio’s I-410 loop, in the wide open dust flats ahead I encounter a distinctly Southwestern Stonehenge. Giant tower cranes, as much as 10-stories-tall, define the immense geographic bowl, punctuated by the shorter, but no less impressive gaggle of standard-height units. It was then, back in 1992, that I finally began to grasp the remarkable career Hertel had ahead of her....

WE know. The first word you think of after “fashion” is likely to be “frivolous.” But fashion, besides being fun, is big business. No one knows this better than New Yorkers.

Museums here have collected apparel since the late 19th century, when the grandest of the grande dames began to donate their Parisian-made confections to the usual suspects: the New-York Historical Society, the Museum of the City of New York, the Brooklyn Museum of Art and certainly the Metropolitan Museum of Art. But scattered around the city are smaller, lesser-known museums that take you from the days of peddlers and pushcarts to the latest edge....

Lucky travelers to the Northwest United States, Harriet Baskas has followed up Atomic Marbles (1993, co-written with Adam Woog), with a guide that goes even deeper into her local stomping grounds and comes up with over 300 venues that, like little museums across the country, you just won’t find anywhere else....

Ups and Downs?
A Place To Put It in Perspective
by Lynne Arany

WHILE the questions nowadays are usually more sophisticated than the old standby “How many people jumped to their deaths in the Great Crash of ’29?,” in these bearish times it is comforting to know that the Museum of American Financial History, just off Wall Street, has an answer: not many. (The economist John Kenneth Galbraith researched the matter and determined that there was no increase in the suicide rate that year.) It was that quest for context—and for “reassurance in times of market uncertainty,” in the words of the museum’s executive director, Brian Thompson—that inspired its founding in 1988, the year after the stock market took a major tumble. In a world where the ups and downs of the Dow are as inescapable as the weather, the museum, now a Smithsonian affiliate, seeks to help visitors understand the deeper economic forces that help shape their lives. Exhibitions like “Rockefeller Rediscovered” and “Morgan” (as in J. P.) allow visitors to trace a line from the robber barons of the industrial age to the day traders of today. The technology changes with the times, too, from interactive CNNfn consoles to an original 1867 Edison Universal Stock Ticker. And there are historic stocks and bonds, vintage photographs and personal ephemera. Appropriately enough, the museum is housed in the Rockefeller dynasty’s old power base, the former Standard Oil Building, and is just a dime toss from the famous buttonwood tree under which the New York Stock Exchange was founded in 1792.